local new wave band from the u.s i don't know anything about this obscure band' but this record is really amazing' don't miss this one.............

this was been posted before' but the link is no longer available so i decided to post this again' anyway this is a uk band'''' enjoy........

frence band dyplomatic' under EMI label ' release in 1987 their very similar to fatidic seconde check this out........

here
Posted by new wave crossover at 8:08 PM No comments:

another band from holland' and this was been released in 1985 and under by starlet recording ' i believe this is the only released by this group....

here
Posted by new wave crossover at 1:45 PM No comments:

Red Lorry Yellow Lorry started properly in 1982, led by Chris Reed (mastermind and front man), as a vehicle to express his own particular intense and angst-ridden vision.

Red Lorry Yellow Lorry make their first demo and are immediately offered recording deals. They release their first single in the same year - "Beating my Head" - and begin to build up a live following in the UK...

John Peel takes to the band and they become one of his favourites. They record Radio sessions for him and go on to release a chain of explosive cult-alternative hit singles.

Red Lorry music rapidly earned a reputation as mind blowing powerful guitar music, something not so many other bands were making in such an unashamed way.

The reputation and records of the Band reach Europe and they go public in 1983-1984 with small tours of Belgium, Germany, France and Holland.

In 1984 the band releases its first album - "Talk about the Weather" - which is received with great critical acclaim.

Meanwhile over in the USA the people were starting to get hip to the Lorries. March 1985 sees the band being invited for their first dates in America. The Band plays a handful of US East Coast shows to find they have become total Cult figures, playing New York's Danceteria Club to a packed concert hall 2 times in the same week.

Red Lorry Yellow Lorry have returned to the scene to pummel their way into your consciousness once again!

With one eye on the past and one eye on the future the band are currently working on material for a new Album. They've been warming up with a hand full of gigs last year - Leeds Cockpit, Headlining Whitby Goth Festival, Metamatik Festival (Italy), Mera Luna Festival (Germany) and Camden Underworld.

here
Posted by new wave crossover at 11:57 AM No comments:

Born John Denver Stanley, Dublin 1960, Stano grew up in Artane and showed no inclination towards a 'musical' career as a child. Attending the local Christian brothers school and then the technical college, his first choice of lifestyle was that of the army. After five months there he settied down to become a carpenter But Stano had always been a non-conformist. His early schooldays had been chequered by a rebellious streak and at the tech. he had been noticed for his distinctive writing abiiities. Even though an avid fan of Bob Dylan's, it wasn't until punk happened that Stano took an active interest in rock music. During the late seventiff!early eighties, Stano hung around the Dublin punk scene, went to gigs, and befriended Johnny 'Rotten' Lydon of The Sex Pistols, who then often came to Ireland to get away from the hustle and bustle of London's whirligig music business. Stimulated by the energy of punk, Stano teamed up with Dublin combo The Threat and started to play synthesiser. Purveyors of a gritty ultrarealist sound their first single 'Lullaby in C'l'High Cost of Living, (Web 1980) was well received and made British radio airplay. Like a lot of groups of the punk period they didn't stay the course and broke up after a short time....

1.Hayley (Journey's Outside My Body)
2.S-Tapes (Within The Jolt)
3.Ascendancy
4.Destruction 28 Nein
5.Singular In The Dark
6.cry across the sea
7.When You're In Love (Bathroom)
8.chaplin

here
Posted by new wave crossover at 9:43 AM No comments:

here:
Posted by new wave crossover at 2:49 AM No comments:

the tier garden released from 1986''' this is another fantastic record check this out..

here
Posted by new wave crossover at 2:24 AM No comments: 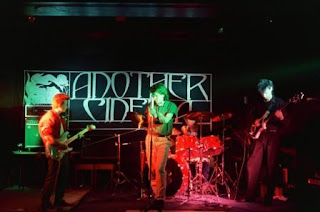 this record was released in 1985 by red rhino the cartel''and this is another obscure band from the 80s' a' combination of new wave and postpunk goth........


here:
Posted by new wave crossover at 1:32 AM No comments: